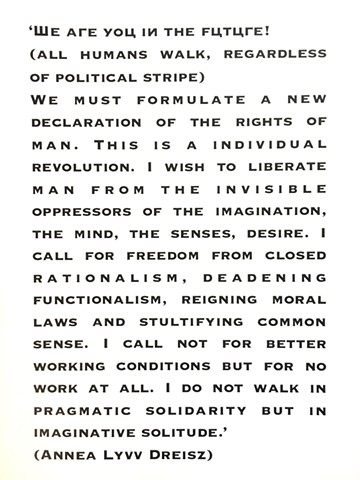 Het Orakel/ The Oracle is an artist space gallery, founded by Antwerp based artist Annea Lyvv Dreisz after she opened 5 Art Gallery’s in 2019 in the context of her Master Class at AARS (Antwerp Artist Run School) following the course “How to Open an Art Gallery“ by Troebel Neyntje. The opening of her own Gallery Space Het Orakel / The Oracle was the finalisation of her Master Class. “How to Open an Art Gallery" is a project that started after I visited 'Troebel Neyntje' a Very Confusing Gallery with a Very Very Brilliant Owner. He made an artist book with Black and White photographs of Antwerpian Artists named "KUNSTENAARS IN ZWART WIT". One of the pictures I made of Guy Rombouts and Bedrich Eisenhoet was in it, so I got a copy and was overly joyed! While strolling along in this Confusing Galleryspace, I stumbled upon the ultimate and hilarious course "How to Open an Art Gallery" made by Sevenans himself, who recently founded AARS or Antwerp Artist Run School. This course was based on the AP academic courses where he portrayshimself opening the door of an Antwerp Art Gallery while meticulously explaining the actions involved with the opening of an Art Gallery. I told Sevenans how I went head by foot seeing that course on video and bought it immediately. It felt like an investment in a Fantastic and Controversial Hilarious Future! With this Course in my hand I felt more powerful than any leader on planet earth and I FELT now I could Change the World! I drove home with my AARS course, my heart Beatin like a Beatnik and my brain a Million Times in Overdrive. When I got home I immediately called Sevenans and told him I wanted to use the course and open a Gallery every month! He found that a very good idea and told me we should start as soon as possible.I got subscribed as the only student at AARS, got a real student card and a few weeks later we succesfully opened a first Art Gallery around the corner.We managed to open 5 Art Gallery’s in 2019. That brought me the idea to finish this Master Class with the Opening of my own Art Gallery. It’s an experiment really. ”Opening an Art Gallery is the most fascinating thing to do! I feel like an explorer, representing our species, bringing back some new ideas in to this world. I feel like saving the Soul of mankind by opening Art Galleries. I see culture as an effort to literally realize our collective dreams."